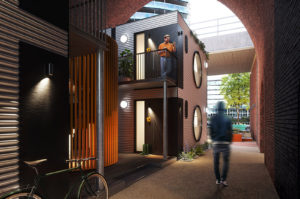 Specialist fire engineers from Manchester-based OFR Consultants are working with industry colleagues to create the new Embassy Village — a new community in Manchester that will provide wrap-around support for the city’s homeless and vulnerable men.

The initiative sees husband and wife team, Sid and Tess Williams, continue to think outside the box and innovate in their fight improve the way homelessness is tackled in our city. They launched the charity in 2019 and started by finding a second life for a luxury tour bus as an emergency shelter and support centre to help people get off the street, housed and into work.

Upon completion it will provide 40 new high-quality modular homes as well as a Village Hall which will offer a community hub and training and mentoring facility for residents, delivering on its objective to reintegrate vulnerable people back into society. Outside space will feature greenery, a vegetable garden, a multi-use sports area and external eating and socialising areas. The scheme will breathe new life into a derelict site below the railway arches between the Bridgewater Canal and River Irwell in the city centre.

Embassy Village has been specifically designed to ‘remove the high barriers and tough obstacles that many people encounter when trying to move forward from life on the street and gain a stable foothold in our communities.’

Fire engineers from OFR Consultants are working on a pro-bono basis on behalf of client, Peel Holdings / Capital & Centric and alongside Project Management firm, ARCADIS and architect, Jon Matthews Architects amongst other local businesses.

Talking about why the business is supporting this important community project, OFR’s Richard Rankin said: “Embassy has made such a positive impact on many lives here in the North West with originally its tour bus, as well as the homes in Manchester, Salford and Bolton — so we absolutely agreed that the new Village project was something that we wanted to contribute our knowledge and skills to.

“It goes without saying that the past 12 months have hit the charity sector hard, and in turn the people who rely on such services. Embassy Village will play a huge role in helping vulnerable people to break the cycle of life on the street, build their confidence and live a fulfilled life within their own home.”

For more information about the project, its scope and how other local businesses can get involved, please click here.